What can the Commissioner's legal team help me with?

Advocacy and support for older people

This Commissioner is always concerned to hear from older people who are experiencing issues with public services and often provides assistance to individuals who need advocacy or legal support.

The cases that the Commissioner deals with directly are tested against strict case acceptance criteria as the Commissioner's office is not allowed to duplicate the work of another public body or organisation.

If you have a complaint or concern you should go through the organisation’s complaints process in the first instance. If they are unable to resolve your complaint satisfactorily then the Commissioner’s legal team may be able to help provided you are over 60 (or over 50 in exceptional circumstances) or acting on behalf of an older person.

How can the Commissioner's legal team help?

The Commissioner’s legal team has provided assistance on a wide range of issues including: 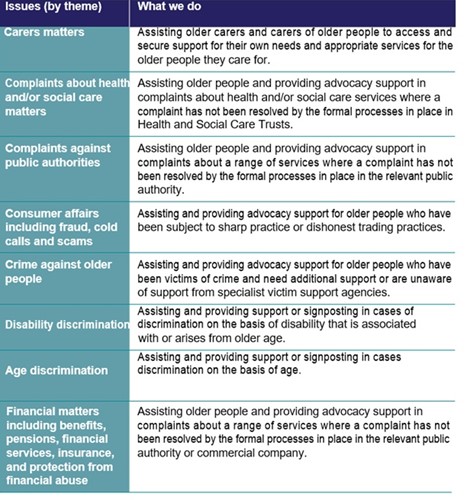 If you think that the Commissioner’s office may be able to help, or would like information on which organisation is best placed to resolve your complaint please call  028 9089 0892. Lines are open from Monday to Friday, 9am-5pm. Alternatively you can email COPNI - visit the contact us section for details.

The following are some examples of individual cases undertaken by the Commissioner’s legal team.

The Commissioner was asked to intervene in a dispute between families of residents of a hospital ward in the community when the Health and Social Care Trust proposed its closure.  The patients of the ward were all older people living with dementia.  The families of the patients were very satisfied with the services provided by the Trust in the facility and were concerned about the proposed closure.  The Trust was required to propose the closure as the facility was no longer fit-for purpose under existing regulatory standards. At the point when the Commissioner was asked by the families to intervene, relationships between Trust officials and the families had broken down.

Case Study 3 – Provision of disability aids and adaptations for a person living with age related disability.

The family of an older person contacted the Commissioner about difficulties their relative was experiencing during building works at their home to provide adaptations for increased disability.  This older man was experiencing mobility problems and a degenerative visual impairment. He applied for a grant from the Northern Ireland Housing Executive (NIHE) to extend his home to create a “wet room” downstairs.

Near the completion of the building works the family became concerned that the new extension was not meeting the needs of the older man. The new room had a small window but was primarily reliant on overhead spotlights for lighting. This degree of artificial light was inadequate for the older person living with a visual impairment. The older man’s family had difficulties obtaining a resolution with the Housing Executive, the builder and the housing association and contacted the Commissioner for advice and assistance. A legal officer, undertaking an advocacy role, made representations to the Northern Ireland Housing Executive (NIHE) and its agent with responsibility. The case was resolved through the intervention of the Commissioner and the necessary changes to the building works were agreed to be carried out at no extra cost.

The Commissioner was contacted by the family of an older man who lives alone and is relatively independent. He received a cold call from a telecommunications network provider with whom he already had a mobile phone contract. As a result of a telephone conversation with a sales person, the older man apparently agreed to purchase a second hand set. When the new mobile phone arrived at his home the older man wasn’t clear that he had agreed to purchase it.  He had sought to return the phone to his mobile telephone network shop in the local town centre. The staff at the shop advised him to speak directly to the network provider. The older person left the new mobile phone in the box and it was never activated. He began to receive bills for the two phones in his possession. He contacted the telephone provider and was advised that the 30 day ‘cooling off period’ in the sales contract had lapsed. He was informed that he could end the new contract if he was prepared to pay a termination fee, otherwise he was told he had contracted to pay the monthly bill for two years.

The older man’s daughter contacted the network provider by phone and in writing. The company would not refund any monies, his daughter has requested a copy of the signed contract between the provider and her father as well as a transcript of the phone call that took place during the initial ‘sell’. The Commissioner’s legal officer intervened on behalf of the older person and made representations to the network provider regarding sales practice and cancellation procedures for older people. A successful outcome was obtained by way of a full re-imbursement of the monies paid by the older person.