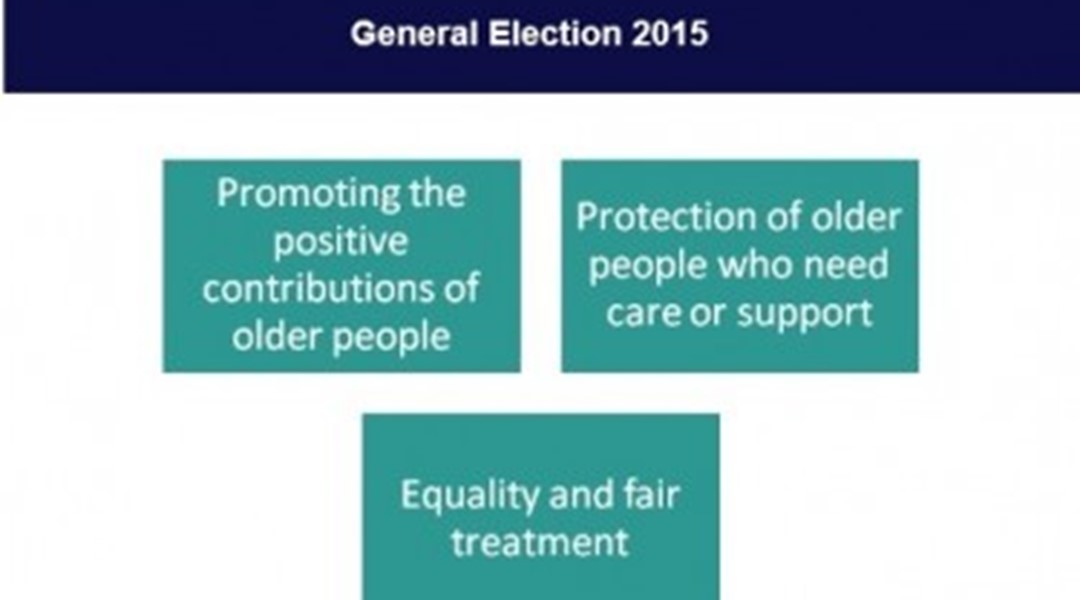 The Commissioner for Older People wants the next Government to focus on three key issues which aim to improve the lives of older people, safeguard and promote their interests and make Northern Ireland a great place to age.

Promoting the positive contributions of older people
Northern Ireland is a better and richer place because more of us are living longer and healthier lives.

'Appreciating Age: Valuing the positive contributions made by older people in Northern Ireland' found that over the next 50 years older people will contribute almost £25 billion to the economy, through working, volunteering, caring and childcare. This contribution was calculated after the costs associated with older age-related spending were considered, contradicting the perceived 'cost' of older people to public services including healthcare.

It is time the contributions of older people are properly valued, and this means protecting the Universal Benefits that ensure thousands of older people can have a decent standard of living and remain active, independent and well.

Commit, engage and promote the positive contributions made by older people.

Promote positive attitudes towards and about older people.

Protection of older people who need care or support
The dignity and care needs of vulnerable older people should be at the heart of planning, delivery, regulation and inspection of care services. Too often we hear of poor standards of care for older people, and of cuts to essential services that enable older people to live dignified and independent lives.

In 'Changing the culture of care provision in Northern Ireland' the Commissioner called for tough sanctions when serious or persistent breaches of regulation occur and for better support and protection for whistleblowers from unfair treatment.

The Commissioner has also called for Adult Safeguarding Legislation to be put in place to ensure that older people are better protected from abuse, without compromising their right to autonomy.

Ensure that needs which are identified through assessment are met in full.

Introduce a single piece of adult safeguarding legislation to include a definition of abuse and to consider criminal charges of elder abuse and corporate neglect.

Equality and fair treatment
Ageism exists within our society and discrimination on the grounds of age is still legal in relation to the provision of goods, facilities and services. This means that older people in Northern Ireland can be lawfully denied medical treatment or forced to pay higher insurance premiums on the basis of their age.

Older people deserve to be treated fairly and to be protected by law. The Commissioner has welcomed the recent announcement by the First and deputy First Minister that legislation will be introduced in coming months, and called for this to be progressed without delay.

Ageist attitudes have also been found to be widespread across the workplace, and the Commissioner's research 'Valuing an Ageing Workforce' found that older people are often overlooked in relation to recruitment, apprenticeships, training and retraining.

Encourage their Assembly colleagues to support the full implementation of anti-age discrimination legislation in relation to Goods, Facilities and Services.

Support older people to remain in the workplace longer through reducing 'cliff-edge' retirement, provide greater provision for flexible working and increase opportunities for older people to continue to develop professional skills or retrain over the life-course.