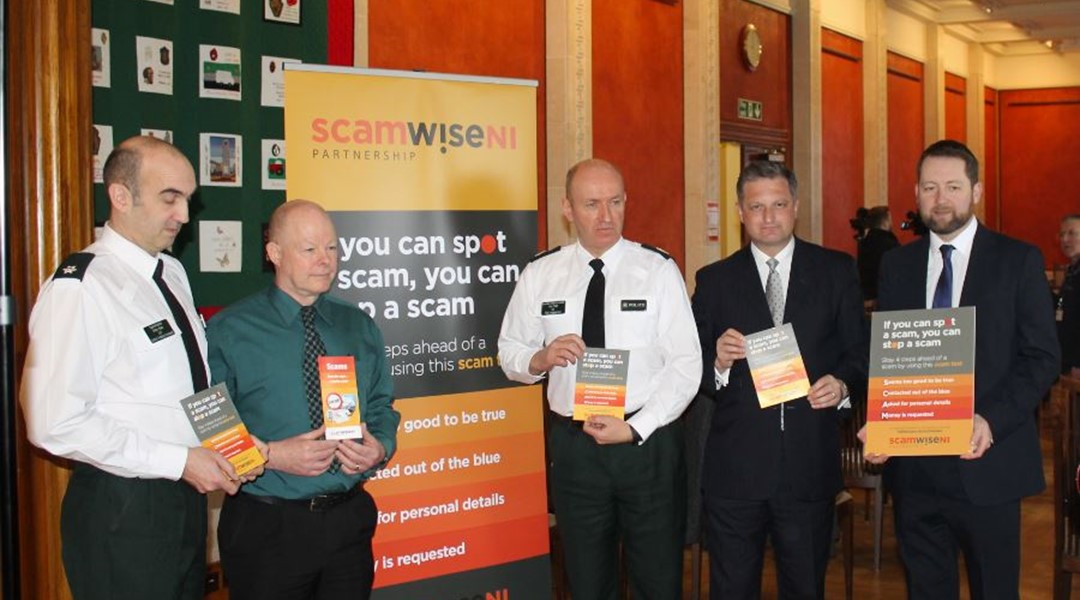 A campaign to raise awareness of postal scams has been launched today, as part of the ScamwiseNI Partnership.

The focus on postal scams comes as the Consumer Council revealed that almost a third of consumers in Northern Ireland have received scam mail, with 80 per cent ignoring the scam attempt or throwing the mail away. *

Unfortunately, those affected are unlikely to report it to the police so the ScamwiseNI Partnership has joined forces with Royal Mail to raise awareness and to encourage reporting.

The Partnership, which includes the Police Service of Northern Ireland, the Northern Ireland Policing Board, Department of Justice, Commissioner for Older persons, the Consumer Council, Trading Standards and Age Sector Platform, has worked on a number of campaigns to date including online scams and romance scams.

A multi media campaign will also run as part of the initiative.  This will include radio, out door and social media advertisements to raise awareness of the postal scams and Royal Mail’s attempts to reduce the impact of scam mail on its customers. Since November 2016 Royal Mail has impounded over three million suspected pieces of scam mail at its major distribution centres. The company has also set up a dedicated helpline, email and Freepost address to provide information and for customers to report concerns.

Audrey Hamilton was scammed out of £14,000 over a period of 10 to 12 years.  Sadly, Audrey passed away in September 2016, but her son Raymond has taken part in a short film explaining how he believes his mum’s details were circulated after she had sent off for a free gift and talks of the emotional and financial impact of the crime.

He said: “It wasn’t a vast amount, it was a small £20 here and £10 there, but they all added up. Towards the end my mum sent that much money that she couldn’t really afford to eat.

“There was a constant drip, drip, drip. Then other ones would get your account details, clear the lot and you’d never hear of them again. There was a vast array of people willing to take advantage of a vulnerable person.”

Discussing what the Police Service is doing to help prevent scams, Assistant Chief Constable Alan Todd said: “Scamming is a growth area of crime which can have an impact on the whole of the community. It’s a matter of real concern to police and something we want to protect the public from falling victim to. We recognise it is not just the police who can impact on scamming.   The ScamwiseNI Partnership  aims to foster a collaborative approach between ourselves and partner agencies advising the public that we all need to be vigilant of any contact from an unsolicited source, whether that is doorstep callers, telephone, mail or online.

“I am delighted Royal Mail has today joined this collaboration and chosen Northern Ireland to launch a campaign to highlight what steps can be taken to prevent people becoming victims of mail scams. They have recognised the strength of the ScamwiseNI Partnership and its unique local voice.

“I would encourage any victims of a scam to report it and pay tribute to those victims who spoke at today’s launch.  Hopefully the courage shown by them in discussing this will help to prevent it happening to others in future.

“Remember, if you can spot a scam, you can stop a scam and if it seems too good to be true, it probably is!”

David Gold, Director Public Affairs and Policy at Royal Mail said: “Royal Mail is delighted to be a part of the ScamWise NI Partnership. We are tackling scam mail head on, working with other postal operators to eradicate this type of mail as well as making it easy for potential victims to report it.”

For more information and advice on scams visit https://www.nidirect.gov.uk/campaigns/scamwiseni