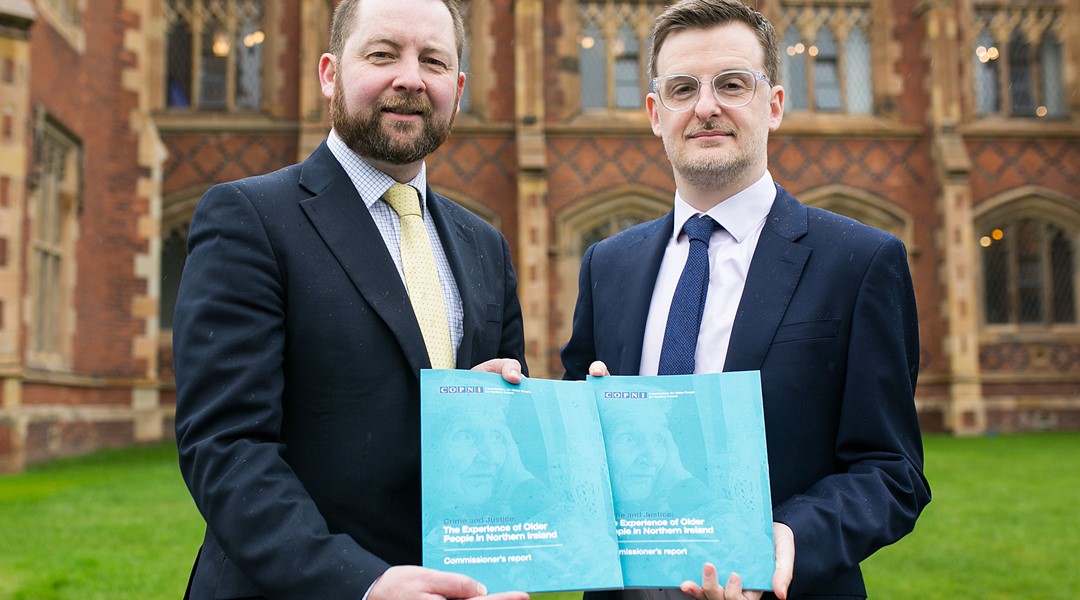 The Commissioner for Older People for Northern Ireland, Eddie Lynch, has published a report which calls for change in how older victims of crime experience the criminal justice system.

The Crime and Justice report, which consulted with older victims of crime, giving an in depth analysis into their experiences as they pass through the criminal justice system, is being launched by the Commissioner today (1 May) at Queen’s University.

The report, which outlines 24 recommendations to agencies including the PSNI, the Public Prosecution Service, Department of Justice and the Northern Ireland Courts and Tribunal Service, is believed to be the first academic study in Northern Ireland to consult with older victims as well as professionals working in policing and criminal justice.

The Commissioner for Older People, Eddie Lynch, said: “Although older people are less likely to be victims of crime, crimes such as burglary, criminal damage, vehicle theft and violence without injury, continue to have a lower outcome rate for older people than other age groups.

“The purpose of this study was not only to better understand why this is the case, but also to understand older people’s experience of crime in order to determine where improvements could be made, enabling me to make informed recommendations to the relevant agencies.”

The research found a number of contributory factors for lower crime outcome rates for older people, including a reluctance to give evidence in court and a fear of reporting because the offender is known to them or knows where they live.  It also found a tendency to delay reporting certain types of crime due to a delayed realisation that they had been a victim or even because they felt too embarrassed to report it.

Older participants in the study also revealed their concerns about the length of time a case can take to get to court with delays causing particular consequences for older people, who are more likely to have issues with memory recall and failing physical health.

The Commissioner continued:  “Being a victim of crime can be a traumatic experience for anyone, but there are particular factors that make older people more vulnerable to the effects of crime.  Older people have an increased fear of crime, a higher rate of physical and mental impairment and disability, are more likely to live alone and often lack the strong support networks of younger age groups.”

“It’s crucial that older people have confidence in the response of the statutory agencies, including the PSNI, the Public Prosecution Service and the courts.  My recommendations aim to improve the experience of older people who have unfortunately been the victims of crime, so they feel fully supported and safe throughout the criminal justice process.”

Some of the recommendations in the Commissioner’s report include:

Dr Kevin J Brown, Lecturer in Criminal Law and Criminal Justice at Queen’s University Belfast, who conducted the research on behalf of the Commissioner, said: “This research has shown that older victims of crime find it more difficult to access justice in Northern Ireland. Urgent reforms are needed to provide better support for older people when they journey through the justice system.’

The Commissioner concluded: “There is a lot of positive interagency work ongoing but there is more work to be done to ensure older victims receive the proper support they require.

“I look forward to working in partnership on this issue and I am committed to taking the recommendations of this report forward.”

You can view the report here