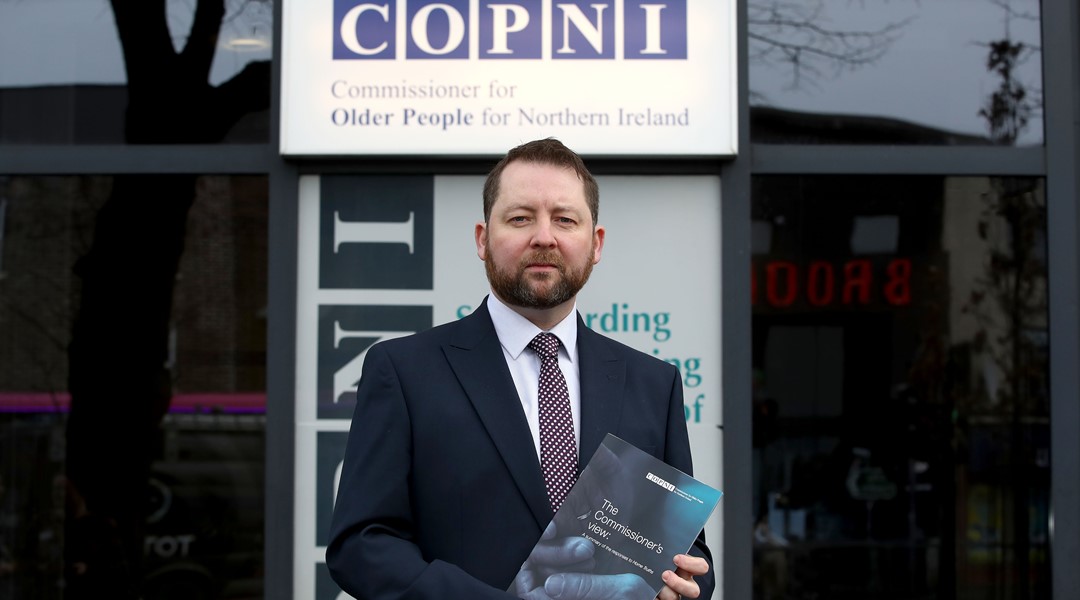 The Commissioner for Older People, Eddie Lynch, met today with the families of residents impacted by his investigation into Dunmurry Manor Care Home. The meeting provided an update on the responses received from relevant authorities, following the publication of his Home Truths report in June 2018.

The investigation report called on seven relevant authorities to respond to 59 recommendations which aimed to improve how all nursing homes across Northern Ireland deliver care, are inspected and managed.  Today’s meeting concluded the investigation and provided families with a summary of the responses received from the relevant authorities, which included four Health and Social Care Trusts, the RQIA, the Department of Health and Runwood Homes.

Over 400 responses (seven responses to each of the 59 recommendations) were received by the deadline in October 2018.  However, considering many to be ‘lacking in substance’ the Commissioner made the decision to request further information, which resulted in a second round of information received late in 2019.

Speaking at today’s meeting, the Commissioner said: “Despite seeking additional information which did offer some assurance, I remain concerned and frustrated by the pace of change.  The relevant authorities have had 16 months to demonstrate action on these recommendations and I am not assured that enough work has been done to make the necessary improvements to the safeguarding and care of residents in care homes.”

He continued:  “The majority of my recommendations have been “accepted” by the relevant authorities and I acknowledge there have been some changes in practice.  For example, Runwood Homes has stated that it has put in place a robust medicines management regime at Dunmurry Manor as well as staff, training and policy changes.  I’m told that staff across the RQIA, the Trusts and Runwood Homes will undertake comprehensive Human Rights training.  And the RQIA has stated that integrated inspections are now taking place and a proportion of inspections are being undertaken at night time and weekends.  I welcome these actions, but the pace and scale of change is not enough.

“There is still much work to be done by the authorities to fulfil their promises on paper and I welcome the Minister of Health coming into office at this time.”

The Commissioner advised the families that many of the responses received, cited the need for a ‘ministerial decision’ in order to be implemented.  These included:

Mr Lynch said:  “I am frustrated that in 2020 we still do not have an Adult Safeguarding Bill.  I met with Minister Swann this week and I look forward to further discussions so that the above recommendations can be progressed as a matter of urgency.  I call on the Minister and the Northern Ireland Assembly Health Committee to progress this work without any further delay and oversee the full implementation of all my recommendations.”

Concluding today’s meeting, the Commissioner acknowledged the bravery and efforts of the families whose loved ones were at the centre of his Home Truths investigation.  Addressing the  family members in attendance, he said:  “Given the nature and magnitude of the recommendations made to the relevant authorities and the number of responses received, this has been a long and complex investigation and I want to thank families for their patience and understanding in getting to this point.”

The Commissioner concluded:  “I remain committed, along with the rest of the COPNI team, to doing everything in my power to continue to drive forward the changes needed to ensure that older people across Northern Ireland receive the quality of care that they require and deserve.”

Read the Commissioner's view: A summary of the responses to Home Truths here

Responses received in September 2018 from the relevant authorities are linked below:

Annex A - Department of Health response

Annex B - Response from BHSCT, NHSCT, SEHSCT and SHSCT to DOH

Responses received in October 2019 from the relevant authorities are linked below: