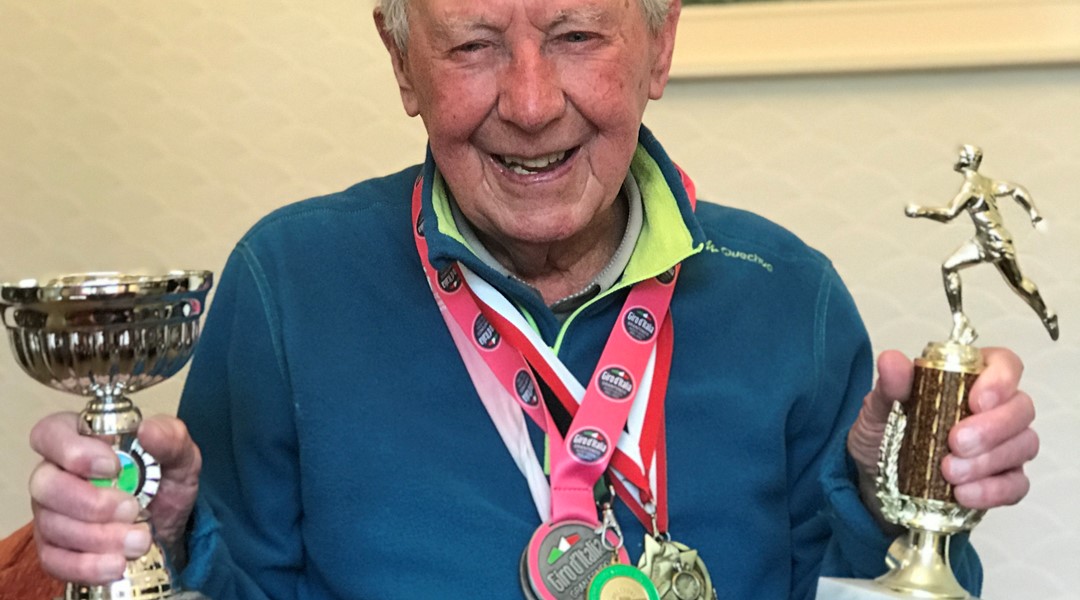 Our ‘words of wisdom’ interview celebrates our older people and the contribution they make. It gets their take on life, lessons learned and advice they would give to their younger self and younger people today. This month we had the pleasure of meeting our oldest ‘words of wisdom’ interviewee yet – 97 year old John McKeag. John’s been running since 1938, has completed eight marathons, over 120 half marathons and still runs 5k every other day. For his 98th birthday this year, he is looking forward to doing a 3 hour charity bike ride to raise money for children’s cancer charity. Can we get three cheers for John?

Hi John, tell us a bit about yourself?

I am 97 years of age (98 in July 2020). I am a widower, my wife Isobel died 28 years ago and I have lived on my own since then. I have one daughter, two grand-children, four great-grand-children and one great-great- grand-child.

What did you work at?

I worked in Harland and Wolff shipyard all my working life. I joined the yard as an apprentice in August 1938 and became a Welder. Eventually I began to train young men to become Welders. For a few years before I retired in September 1981 I advised Lloyds of London on Insurance issues in the yard. For the first 18 years of my working life I cycled to work from near Killinchy, a distance of some 125 miles per week. We then moved to live in Dundonald which was much more convenient.

What advice would you give to your younger self?

To pay a bit more attention to the wise words of my parents.

I had a long and successful running career. I was the first runner to represent Northern Ireland over the age of 80!  I started running in 1938, and have completed eight marathons and probably around 120 half-marathons. I took part in the World Masters Cross Country Championships in Italy in 1975 and came 10th in my class. I am particularly proud of having been British and Irish Masters Cross Country Champion for 5 years in succession, 1970-1975.  The last race I ran was when I was 86 – that was the last time I represented Northern Ireland.  I still run every other day on my treadmill – about 5k I do.

I like cycling too – when I was 93 I completed the Gran Fondo in Northern Ireland – that was 50 miles. 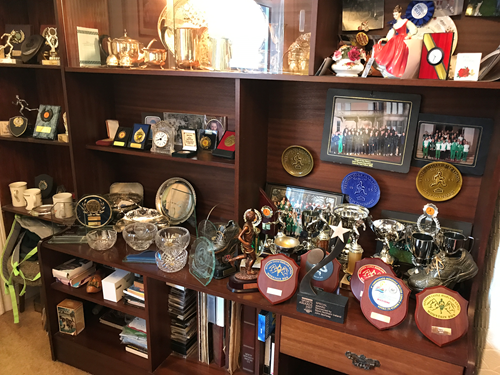 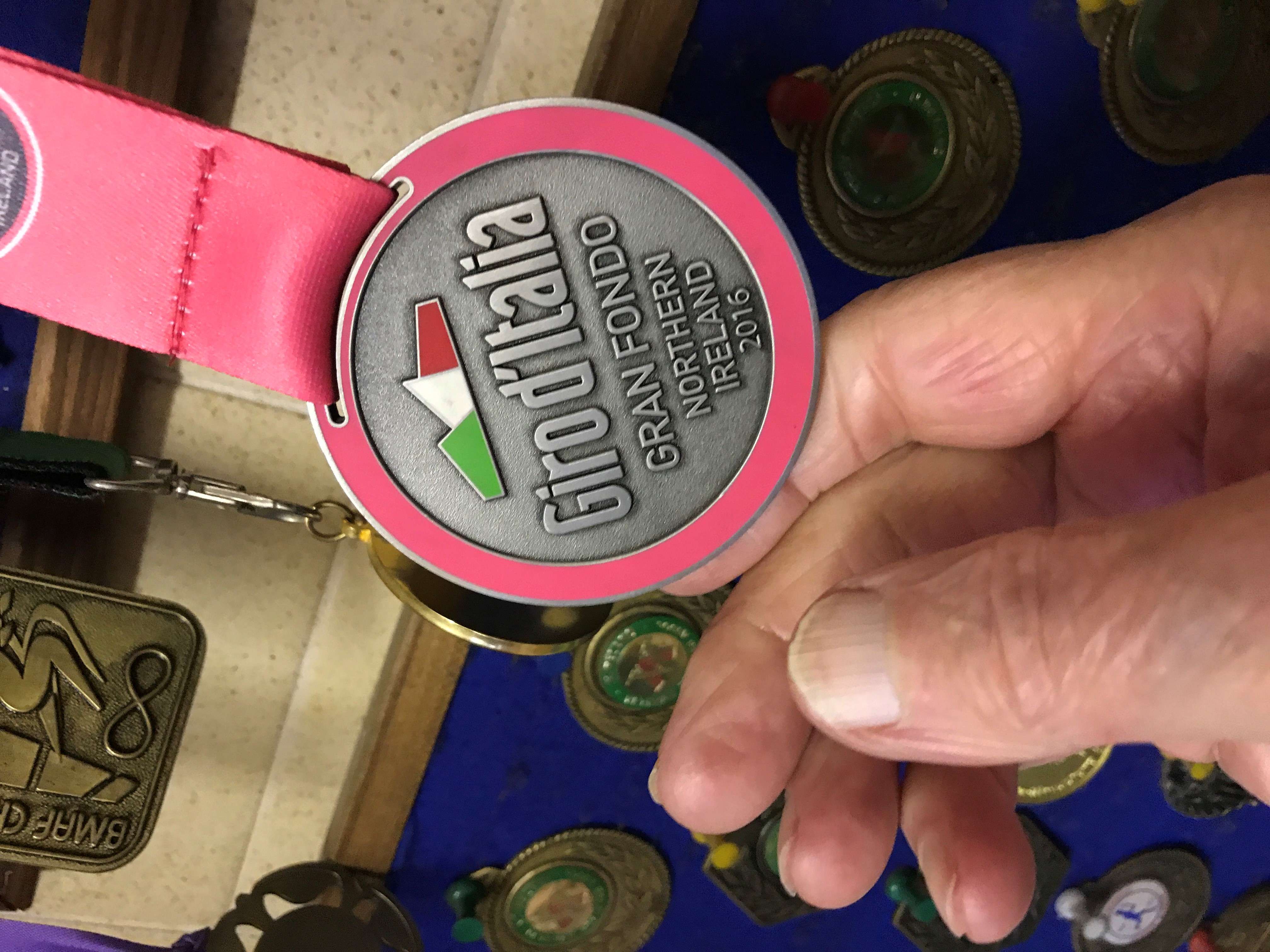 What advice would you give to young people?

I would advise them to take their education seriously, to be tolerant, to keep fit and to steer clear of alcohol and drugs.  I think younger people should take part in sport, it worked for me.  It hasn’t done me any harm, I’m still here and feeling good.  I didn’t run for the enjoyment, I ran to win!

What was the best age of your life?

When my wife and I were making use of our campervan. We toured all over Europe and had a wonderful time doing so. 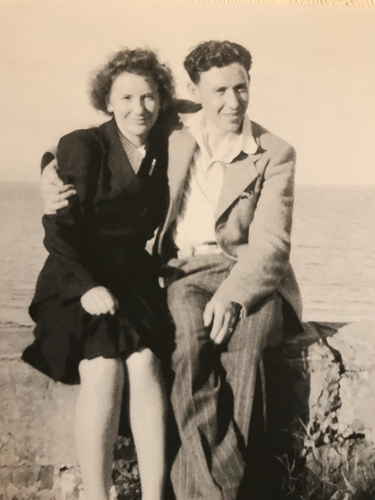 John and his wife Isobel

What was the best decade?

Round about the 50/60s. It was a much simpler life, very little violence, no drugs and no pressure from social media.

What is your earliest memory?

Walking two miles to school in Lisbane every morning (and back in the afternoon), rain, hail or snow. For mischief we used to hide the schoolmaster’s cane which he was fond of using.

What’s your secret to living a long, healthy and happy life?

Stay off the booze, don’t smoke, exercise and remember a positive attitude is everything.

What would you say are the most difficult and most rewarding things about growing older?

I find that the most difficult thing about growing old is giving up certain activities that I have enjoyed for years, such as running and cycling.  Although in saying that I haven’t really had to give them up yet.  Just competitively I have.  The most rewarding is seeing my family growing up and doing well for themselves. I am glad to say I have a very close relationship with my family.

What is the biggest misconception about getting older?

It is a misconception to think that once a person is a certain age their contribution to society is finished.  Age is only a number; forget about age; Have a positive attitude; take an interest in everything going on and make the best of every day.

Would you like to take part in our words of wisdom interview?  Or do you know an inspirational older person who is young at heart and defies the stereotype of an older person?  Does your Granny love to surf? Or maybe you have a Grandad mad for skydiving?  Perhaps your older parents are still working or are selfless volunteers continuing to make a difference to their community.  If you know someone who fits the bill and who would be happy to be interviewed, we’d love to hear from you.

Get in touch by emailing communications@copni.org